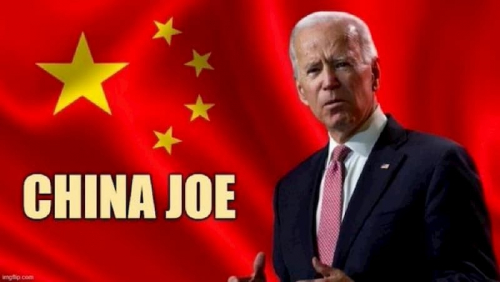 “Director of National Intelligence (DNI) John Ratcliffe assessed that China interfered in the 2020 federal elections, according to a letter transmitted to Congress.

In the letter (pdf), Ratcliffe alleges that intelligence about China’s election interference was suppressed by management at the CIA, which pressured analysts to withdraw their support for the view.

Citing a report by the Intelligence Community Analytic Ombudsman Barry Zulauf, the director of national intelligence said some analysts were reluctant to describe China’s actions as election interference because they disagreed with the policies of President Donald Trump.

The Washington Examiner published Ratcliffe’s letter and the ombudsman report on Jan. 17, ten days after publishing an original report on the documents. The ODNI did not respond to requests from The Epoch Times to authenticate the documents.

“Based on all available sources of intelligence, with definitions consistently applied, and reached independent of political considerations or undue pressure—that the People’s Republic of China sought to influence the 2020 U.S. federal elections,” Ratcliffe wrote…”

The epoch Times goes on to state that, while Chinese interference is said to have occurred and was intentionally ignored or downplayed in reports by the CIA, specific details related to China’s involvement are not given in the brief summary report given to Congress on January 7th:

“These analysts appeared reluctant to have their analysis on China brought forward because they tended to disagree with the Administration’s policies, saying in effect, I don’t want our intelligence used to support those policies,” he added.

Neither the ombudsman report nor the letter from Ratcliffe includes details on China’s meddling. Zulauf redirected an interview request by The Epoch Times to the ODNI, which didn’t immediately respond to an emailed request.

The analytic ombudsman’s report assesses that politicization occurred in relation to both Russia’s and China’s election interference. Zulauf assessed that neither intelligence community leaders nor analysts are at fault, blaming the hyperpartisan atmosphere in the United States instead.

We will keep you posted on further developments resulting from this report, which could be extremely significant, given its implications and ties to the 2018 executive order that we mentioned, earlier.

It should e noted, however, that Ratcliffe has made previous claims in 2020 that are backed up by the findings of this report.

“The intelligence is clear: Beijing intends to dominate the U.S. and the rest of the planet economically, militarily, and technologically,” he wrote. “Many of China’s major public initiatives and prominent companies offer only a layer of camouflage to the activities of the Chinese Communist Party.”

Congress certified Joe Biden as the president-elect on Jan. 7. In the two months leading up to the certification, Trump challenged the outcome of the election in seven states, citing unconstitutional changes to election laws and potentially illegally cast votes.

Below are images from the ODNI report. 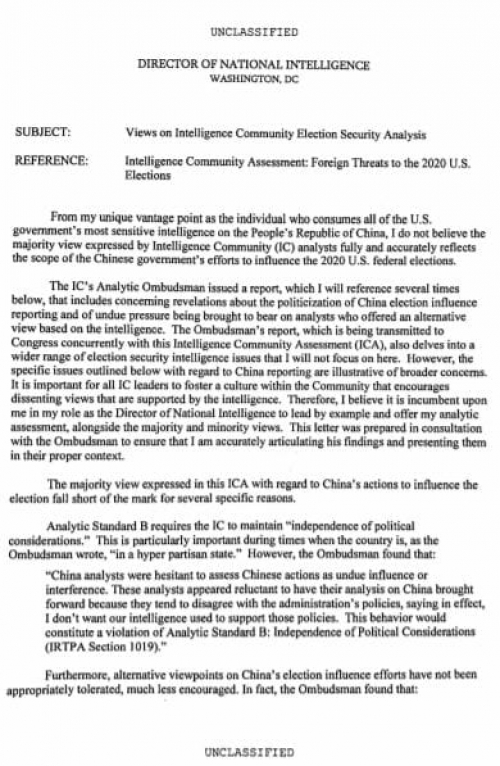 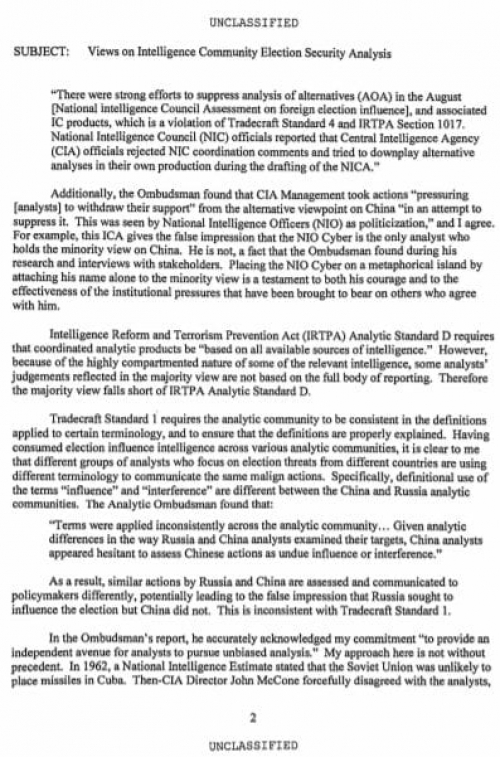 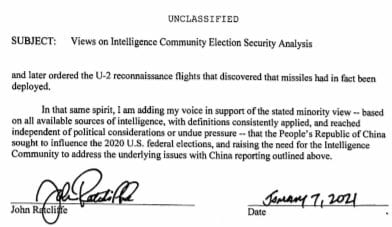